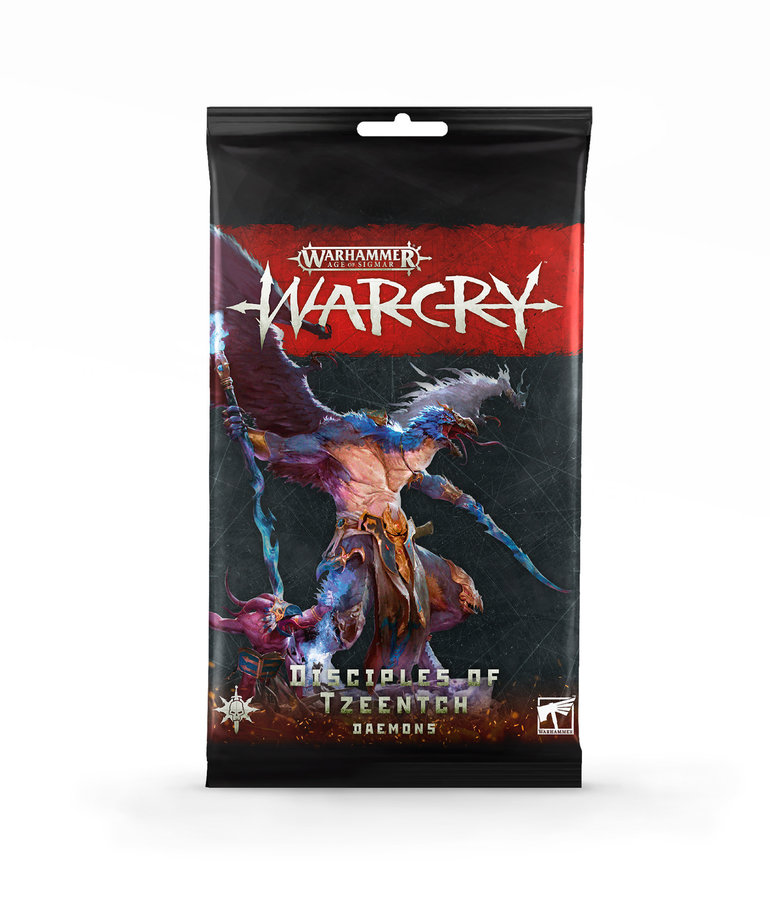 Tzeentchâ€™s minions revel in manipulation â€“ after all, it is not for nothing that their patron is known as the Architect of Fate. Within great cities lurk hidden Kairic Acolytes, while vicious Tzaangor flocks stalk the warped wilds. The daemons of Tzeentch are especially strange, often casting forth gouts of aetheric fire. Tzeentch is the greatest patron of sorcery among the Chaos Gods, and so it is little surprise that many of his followers are mighty wizards, their sorcerous power rewriting the very laws of reality.

Bring the malefic madness of the Tzeentchâ€™s daemonic legions to Warcry with this card pack! This set lets you use a variety of daemons in your skirmish battles. Blow your enemies apart with magical warpfire or descend upon them in a chittering, squirming horde. The Changer of Ways, after all, is all about choiceâ€¦

Contents:
_x000D_ - A faction ability card, allowing you to harness tactics, tricks and abilities unique to this warband, including the runemarks you need to use them. The reverse allows you to identify the fighters in your warband. The set contains a faction abilities card in each of the following languages: English, French, German, Italian, Spanish, Chinese, Japanese, and Russian.
_x000D_ - Fighter cards for 8 types of fighter, including Blue Horrors, Brimstone Horrors, Pink Horrors, Flamers of Tzeentch and Screamers of Tzeentch
_x000D_ - 2x divider cards, used to keep track of any tokens that apply to fighters in games