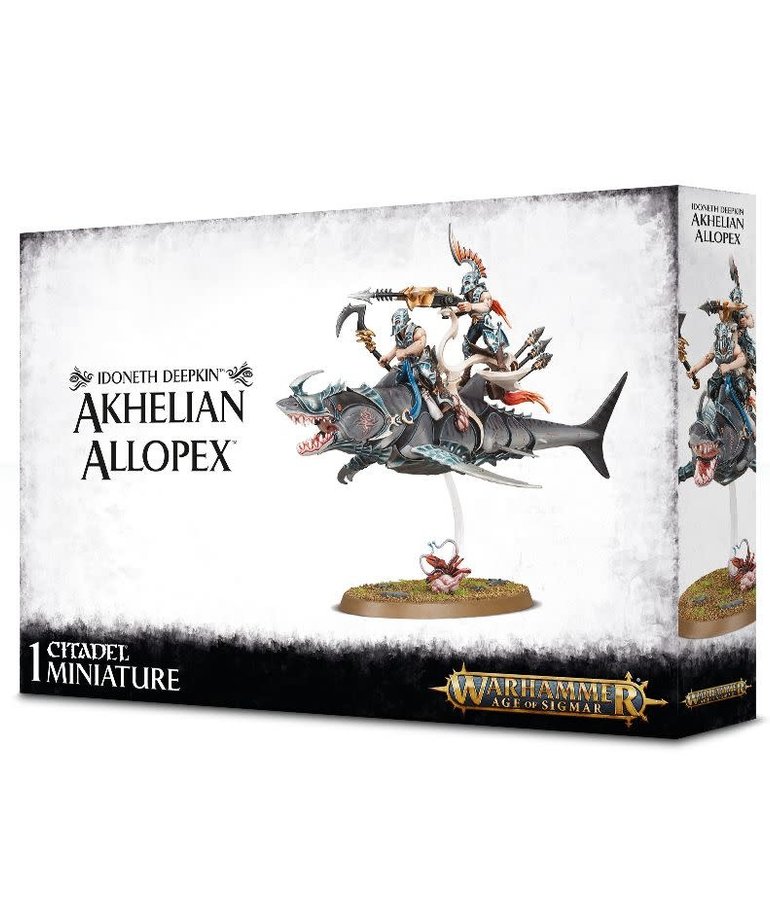 At first they appear as spectral blurs in the ethersea, distant streamlined shapes that seem to materialise from nowhere. With powerful thrusts of their sickle-finned tails, the forms grow all too quickly as they launch their attack. Sleek, muscular and built for dealing death, Allopexes are legendary predators of the deep oceans. Attracted to blood, they feed upon anything they can fit into their large jaws. The mouth of an Allopex is lined with serrated triangular teeth, razor-edged saws which can bite man-sized holes in prey. With blades attached to their fins and riders manning harpoon launchers atop their backs, the Allopex is a living weapon of war.

This multi-part plastic kit contains the components necessary to assemble an Akhelian Allopex. A large, fierce-looking bond-beast with a shark-like silhouette, its fins are modified with sharp blades and its head and eyes covered with metal armour, to facilitate its control by its riders. 2 Akhelian Guard mount the beast â€“ the foremost clutches the reins in his left hand, with a barbed blade (or optional barbed hook) in his right ready to cut down any nearby enemy who survives the attentions of the Allopexâ€™s ferocious bite. Behind him stands a Guard manning the razorshell harpoon launcher atop a specially-built platform â€“ this can optionally be built as a retarius net launcher, both options equally devastating and featuring a cache of harpoons behind the weapon. The pilot features a helmet with no crest â€“ allowing the harpoon launcher a clear shot â€“ and the gunner, almost seeming to make up for this, features a particularly large crest; both feature the heavy plate and bare arms that typify the Akhelian Guard. You have the option to model the Allopex with mouth closed or open, and a selection of accessories â€“ fishing net, rope and grapple hook, fiasco bottles, normal bottles and bottle and case â€“ used to decorate the creature and base.

This kit comes as 47 components, and is supplied with a Citadel 90mm Oval base & flying stand.