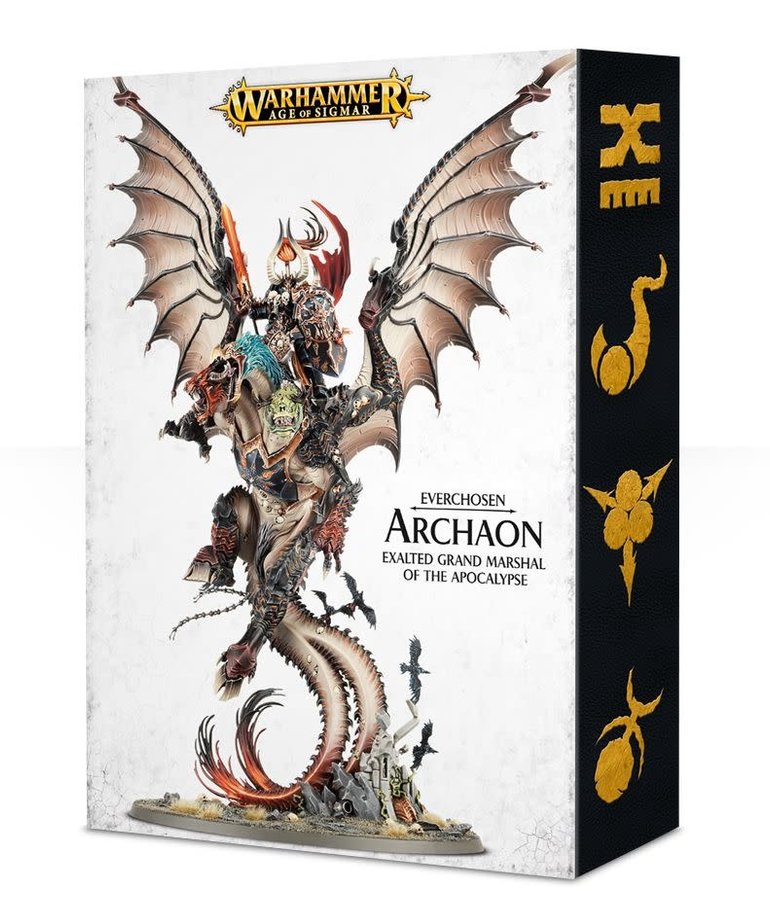 Spoken of in fearful whispers by warlords and kings, Archaon is the shadow of Chaos falling upon the Mortal Realms. Greatest of the Dark Godsâ€™ champions, the Exalted Grand Marshal of the Apocalypse, he is the Everchosen - the doom of all. Uniting the armies of Chaos with his fist of iron, wielding the legendary daemon sword the Slayer of Kings and mounted upon the terrifying, three-headed beast Dorghar, he rides out to meet the forces of Order that seek to loosen the grip of Chaos. Archaon - the Three-Eyed King, the World Razor, the Thirsting Predator - will see to it that Sigmarâ€™s heroes fail in their quest, and that the united hosts of Chaos will unmake the Mortal Realms in their terrible, howling glory.

This kit contains all the components necessary to make one absolutely staggering, enormous, intimidating Archaon, the Everchosen. Covered in the gifts of the Dark Gods, he bears the Armour of Morkar, featuring numerous Chaos markings, inscribed with runes of warding and malice. His shield displays the symbols of the Dark Gods, and he clutches the Slayer of Kings. His vast winged mount, Dorghar, has undergone countless horrific mutations as he consumed souls from the carcasses of Archaonâ€™s bested foes - huge wings, the faces of unfortunate Stormcast Eternals whose souls he has consumed embedded within his skin, three daemonic heads and twin tails.

Eighty-five components in total are included, with a gigantic Citadel 160mm Round base.