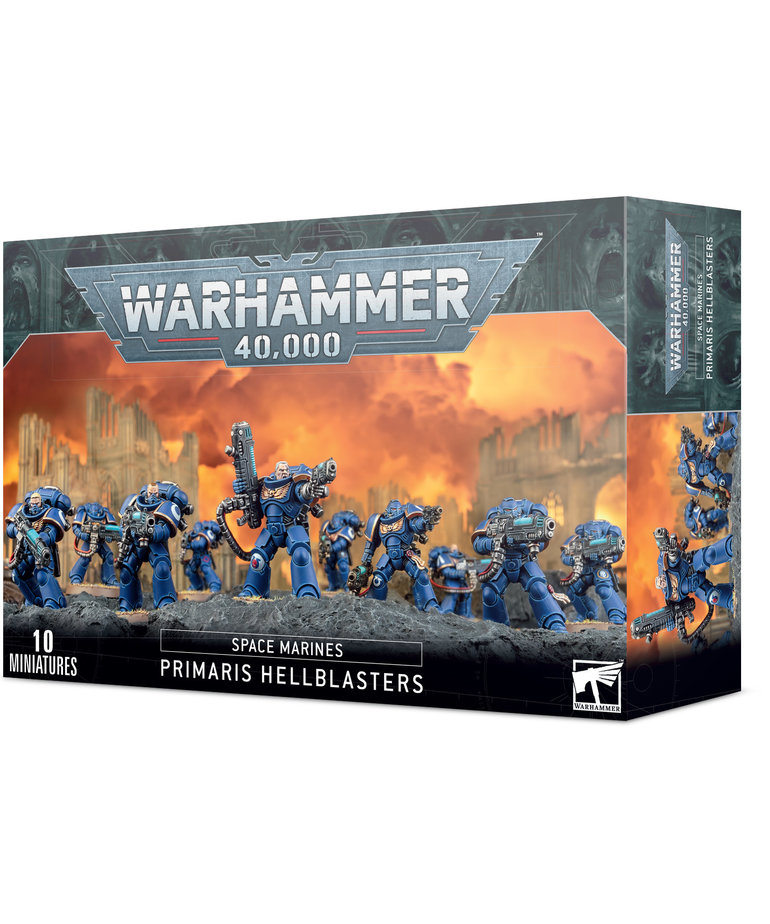 Imperial observers have likened the fire of a Hellblaster Squad to the incinerating power of a stellar flare. Bolt after bolt of plasma sears across the battlefield; those caught in the Hellblasters' sights are swiftly annihilated, their armour blasted to ash and their flesh and bone to glowing motes. Even armoured fighting vehicles are swiftly reduced to heaps of metallic slag. Deployed at the correct point and time, a single Hellblaster Squad can blunt the thundering assault of an armoured spearhead, or lay low even the most titanic alien fiend.

This multi-part plastic kit contains the components necessary to assemble a set of 10 Primaris Hellblasters. Clad in Mk X Tacticus power armour, they eschew the complex variations of wargear many of their battle-brothers carry, preferring instead to focus on and specialize in a single-armament specialism plasma.

The models can be assembled as either a 10-man squad, a squad of 9 Hellblasters with a Sergeant or 2 separate 5-man squads, each with a Sergeant of their own. The whole squad can be armed with a host of plasma weaponry â€“ there are 10 plasma incinerators included, with the components required to turn any of them into an assault plasma incinerator or heavy plasma incinerator, depending on your preference. The assault and heavy variants feature alternate muzzles, ammunition flasks and different cabling attaching the weapon to the Hellblasters' backpack. There are 4 incinerators which are being carried rather than aimed; you have the option to arm 4 Hellblasters with plasma pistols in the other hand.

A problem (some call it a bonus!) of plasma weaponry is its tendency to overheat; there are several optional components reflecting this. Bare head options featuring nasty burns are included for the Sergeant, and there are bionic arms included, heavily implying lost limbs in plasma accidents. There are also plenty of pistol holsters, reliquaries, grenade sets and purity seals included.

The Primaris Hellblasters come as 250 components, and are supplied with 10 Citadel 32mm Round bases and a transfer sheet.