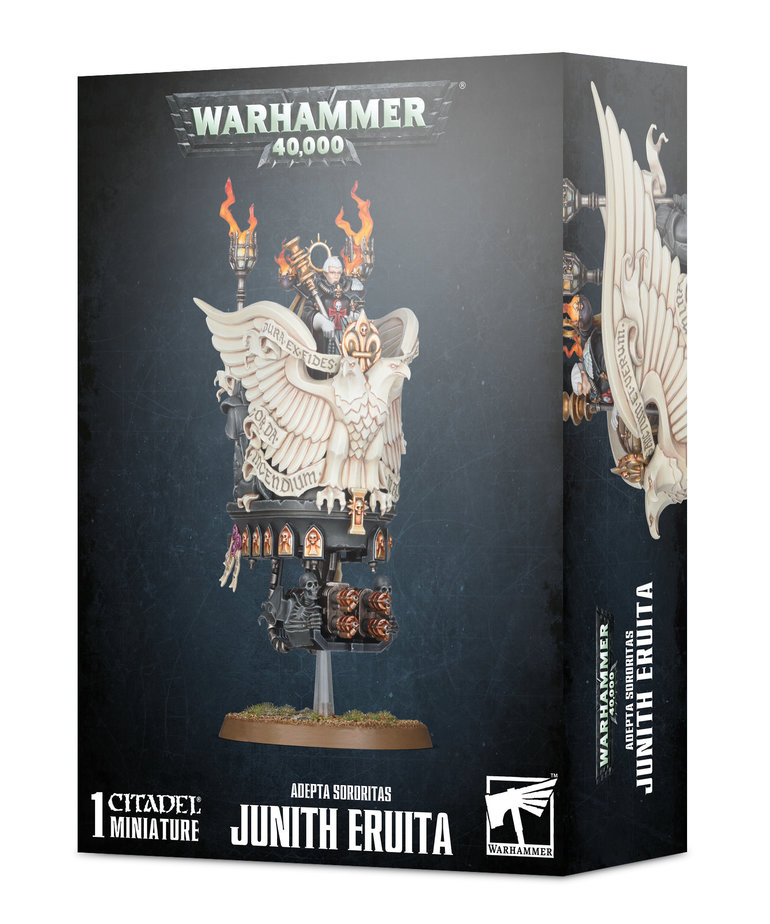 Junith Eruita sweeps into battle wreathed in holy fire and holding high the Mace of Castigation. Riding within the Pulpit of Saint Hollineâ€™s Basilica, she hovers across the battlefield upon thrumming waves of holy energy. The pulpitâ€™s heavy flamers swivel seemingly of their own accord, seeking out the heretical and the faithless and immolating them without mercy. As the pyres blaze higher, the Canoness Superiorâ€™s voice rings out over their furious crackling, her every utterance as sharp and clear as the bells of Ophelia VII. No matter how outnumbered, how beaten down and bloodied they may be, every true Imperial servant who hears her words feels the fires of faith kindle anew in their breast. They surge back into the fight with a prayer on their lips and righteous hatred in their eyes. This is Eruitaâ€™s greatest gift from the Emperor, this undying flame of absolute belief that leaps to all those around her as though their souls were dry tinder and her words the blazing brand. In this inferno of faith have countless heretics, witches and aliens burned, and by its white heat have manifold Imperial victories been forged.

Junith Eruita is a unique HQ choice for the Adepta Sororitas, and bears the fabled Mace of Castigation. She is flanked by burning braziers and the pulpit she rides in is equipped with a pair of heavy flamers â€“ those heretics arenâ€™t going to burn themselves!

_x000D_ - A unique HQ choice for the Adepta Sororitas Faction
_x000D_ - Canoness Superior of the Order of Our Martyred Lady
_x000D_ - Floats into battle within the Pulpit of Saint Hollineâ€™s Basilica, which is equipped with a pair of heavy flamers_x000D_ _x000D_