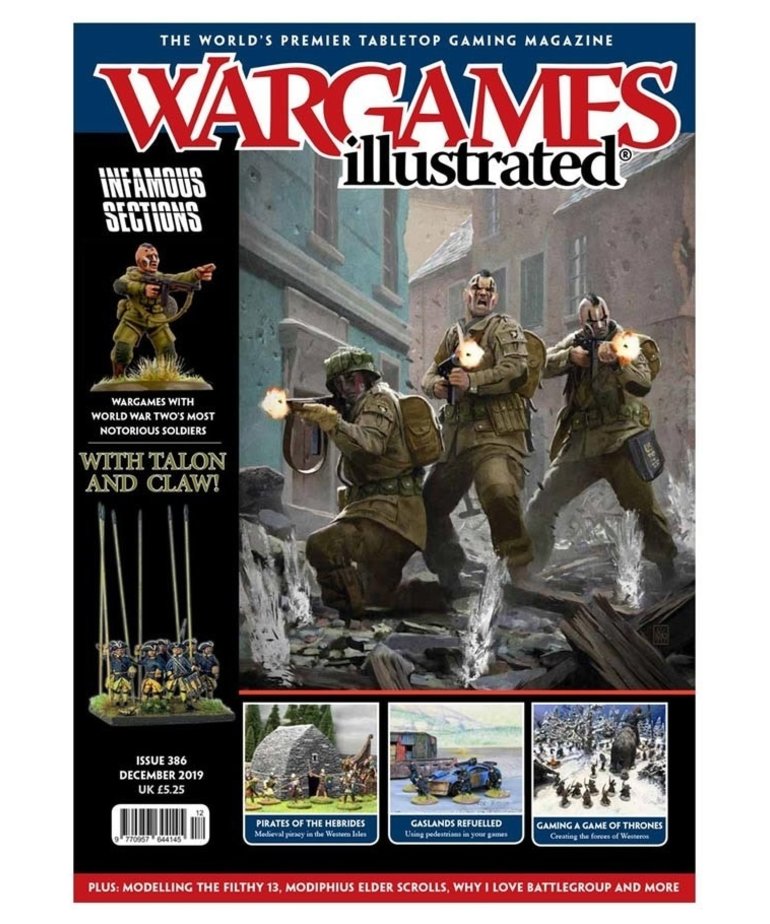 Key Features:
_x000D_ - Wargames Illustrated is a magazine dedicated to miniature wargaming which is focused on historical tabletop wargames.

Wargames Illustrated returns with its December Edition. This month check out the feature on Judge Dredd catching criminals at Christmas!

Contents:
_x000D_ - Observation Post - Our regular look at whatâ€™s new and forthcoming in the hobby.
_x000D_ - Theme: The Filthy 13 - Neil Smith delves into the Hollywoodized history of this most infamous of World War Two sections and comes out with some great wargaming suggestions.
_x000D_ - Building Antietam - Andy Thomlinson tells us about his project to build a scale model of the Antietam battlefield, for use by the South London Warlords in their Fire and Fury games._x000D_ Theme: Plastic Parachutist Conversion Course - The Filthy 13 are back for more! In this article Phil Lewis shows us how to turn an M43 uniform into the M42, to represent this infamous section as they would have appeared on the eve of the Normandy landings, 1944.
_x000D_ - Pirates of the Hebrides - Games Designer Chris Peers provides some information on a skirmish faction which may be used for his On The Seven Seas and Dan Merseyâ€™s Lion Rampant rules_x000D_ Theme: A Busy night in Little â€™Appens - In keeping with this monthâ€™s theme, one of the most Infamous Sections of World War Two (albeit one that only came to light on BBC TV in the 1960s) springs into action in defence of their green and pleasant land._x000D_ Talons, claws and rotten dice - Barry Hilton introduces WI Editor Dan to the Great Northern War via the latest supplement for Beneath the Lily Banners - With Talon and Claw.
_x000D_ - Theme - Popskiâ€™s Private Army - Jim Graham introduces a unique warrior from World War Two who led a disparate group of troops into action through a number of theatres._x000D_ An out of Vehicle Experience - Some (unofficial) rules for using pedestrians in Gaslands.
_x000D_ - Gaming a Game of Thrones - Gary Mitchell takes us into a fictional world that may have its own game system but when did that ever stop gamers from finding a cheaper, alternate way to game?
_x000D_ - â€œHow toâ€¦ Get an Extra Hand - King of the â€˜How toâ€™ Paul Davies returns with a mean modelling tip using Lego.
_x000D_ - Designerâ€™s Notes - Wasteland Warriors - Jaye Wiley outlines the ideas behind his new post-apocalyptic supplement for the Fistful of Lead rules system.
_x000D_ - Modiphius Entertainment - We take a trip down to Modiphius Entertainmentâ€™s London HQ to talk to CEO Chris Birch and take a look at their forthcoming Elder Scrolls: A Call to Arms miniatures game.
_x000D_ - â€œDeeds that Thrilled the Empireâ€ - Robert Giglio presents an episode of derring-do in the Western Desert during World War One.
_x000D_ - Jingle Bell DROKK! - Well, itâ€™s Christmas time once again, which usually means Peace on Earth and Good Will to all Men. Unless that is, youâ€™re enforcing the law in Mega-City One!
_x000D_ - Painting JT - The Survivalist - Putting paint to metal on a new WI Giants in Miniature figure.