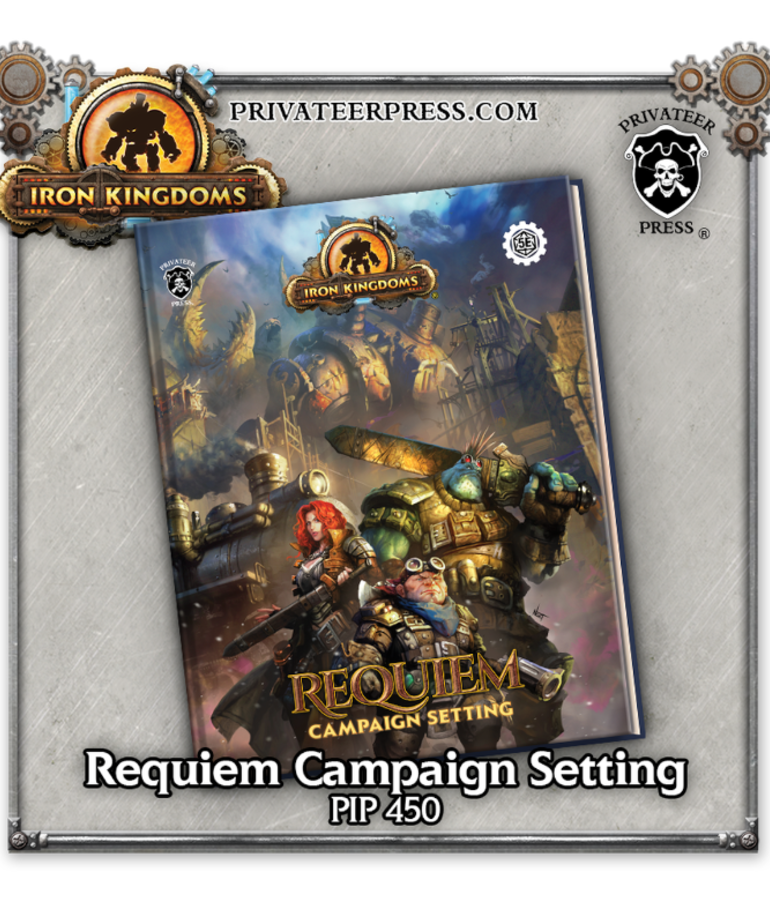 Delve into the award-winning world of the Iron Kingdoms with the latest edition of the Iron Kingdoms Roleplaying Game from Privateer Press. Iron Kingdoms: Requiem combines this fantastic setting with the newest edition of the world’s most popular roleplaying game. Inside this book, players will find the history of the Iron Kingdoms and information describing the current state of the world following the Claiming. Alongside these chapters is an extensive gazetteer providing detailed information on the most notable of the world’s unique and fascinating locations. When making a character, players will be able to choose from many of the familiar countries and cultures of the setting. Whether a player wants to be a human, gobber, trollkin, Rhulic dwarf, ogrun, Iosan, or Nyss elf, this book provides all the rules that make these different peoples unique. When choosing a class, there are options many players are already familiar with, from the stalwart man-at-arms fighter to the free-flowing monk of the Order of the Fist. Beyond these are brand-new rules for playing the characters that make the Iron Kingdoms such a memorable setting. These new classes include, among others, gun mages, arcane mechaniks, combat alchemists, and warcasters. Alongside these options are new feats, spells, and backgrounds to make characters feel even more a part of the world of the Iron Kingdoms. Finally, within the pages of Iron Kingdoms: Requiem are extensive rules for the arcane technologies of the setting. These rules cover subjects from firearms and mechanika, like the galvanic arms and armor of the storm knight, to the mighty warjacks that accompany warcasters into battle.