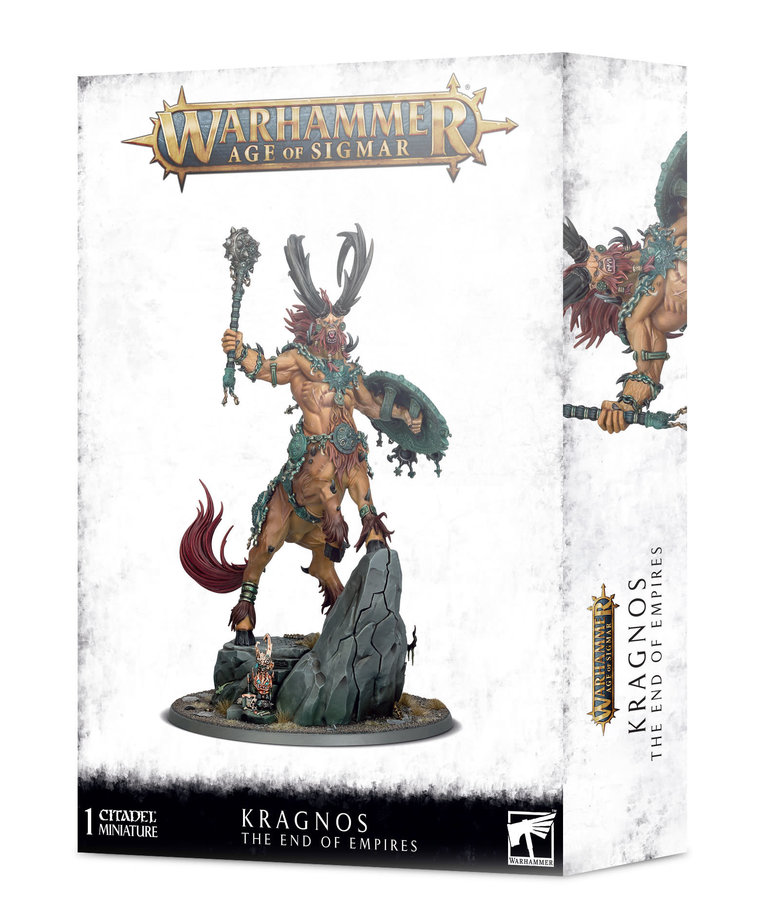 0 reviews
Add your review
- The god of earthquakes, able to lead all forces of Destruction
- An imposing presence on the tabletop, standing at nearly 7.5 inches tall
- An unstoppable force in melee and highly resistant to magic
5 In Stock
Add to wishlist / Add to compare / Print

In the Age of Myth, long before the reign of Sigmar Heldenhammer, gods walked among mortals across the nine realms. One such deity was Kragnos, the Living Earthquake, greatest of the centauroid Drogrukh, who glutted upon offerings of monster marrow and amberbone until truly divine power coursed through his veins. Brought low and imprisoned by the last Draconith princes and the slann Lord Kroak, Kragnos spent uncounted years beneath a mountain until Alarielle's Rite of Life sundered his prison and set the god loose. Now free to continue his rampage, the End of Empires strikes out across the realms in a storm of earth-shaking violence.

Kragnos, the End of Empires, arrives in Warhammer Age of Sigmar with a thunderous crash, ready to lead any army of Destruction. As the embodiment of Ghur's savagery and a totemic figure of awe among the Destruction Grand Alliance, his overwhelming might is nearly without equal. Smashing aside scores of enemy soldiers and brutalising their monsters with The Dread Mace is akin to child's play, while his legendary shield Tuskbreaker (so named for chipping the tooth of Gorkamorka) renders enemy magic a mere harmless breeze. Despite this, perhaps his most terrifying trait is his berserk charge, which can carry enough force to kill even a fully grown dragon in a single deadly blow.

Contents:
- The kit is comprised of 74 plastic components, with which you can assemble one Kragnos, the End of Empires. Multiple options are given for assembly, including three different faces and two poses for his neck and head (one looking left, while the other looks right). This model is supplied with a Citadel 130mm Round Base.