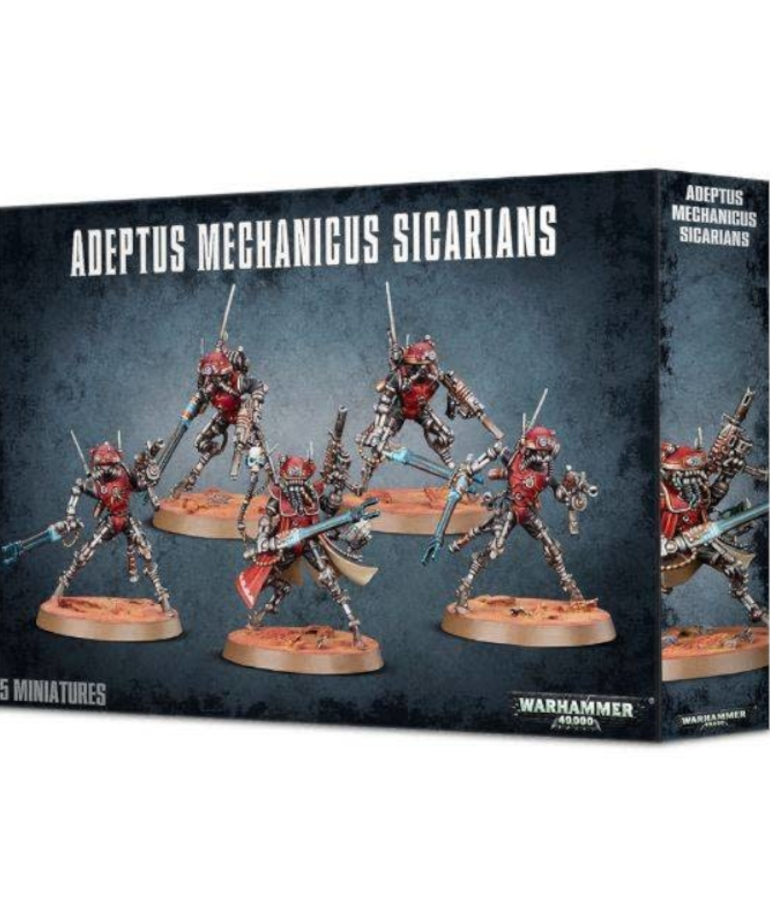 0 reviews
Add your review
- Initially an elite assassination squad, the Sicarian Ruststalkers proved so effective at the art of killing that they were repurposed as front-line, physics-manipulating commandos.
- Now more machine than man, the Sicarian Infiltrators are a hideous, f
2 In Stock
Add to wishlist / Add to compare / Print

Now more machine than man, the Sicarian Infiltrators are a hideous, frightening strike force - the height of Adeptus Mechanicus posthuman engineering. Enemies fall, deafened and blinded by the scree of a brutally disruptive audiovisual assault; battles are often decided before even a single kill is confirmed.

The Sicarian Infiltrators are the scout class; almost their entire human heads have been replaced with an intricate domed helm allowing a three-hundred and sixty degree view of the battlefield. Two weapon options are available to each model - ten sets of stubcarbine and power sword, or ten sets of taser goad and flechette blaster; a total of twenty weapons in the box. Their princeps carries a stubcarbine and power sword, with an included infoslave skull - every movement recorded and analysed for the optimisation of battle.

Initially an elite assassination squad, the Sicarian Ruststalkers proved so effective at the art of killing that they were repurposed as front-line, physics-manipulating commandos. Their transonic weapons hum and resonate with sickening efficiency, passing through the strongest armour as if it simply didn’t exist.

Contents:
- The box contains 5 different, cybernetically augmented gasmask-clad Sicarian Ruststalker heads, covered in sensors and data-gathering devices to further the quest for knowledge. More machine than man now, their bodies are encased in pressurised armour. An impressive array of armament options include two transonic blades each, or a loadout of chordclaw, transonic razor and grenade pack, making a total of twenty-five included weapon parts. Their princeps includes a prehensile dataspike.
- This 117-component, multi-part plastic kit contains all the parts necessary to make either five Sicarian Ruststalkers (including one princeps), or five Sicarian Infiltrators, and comes with five 40mm bases.