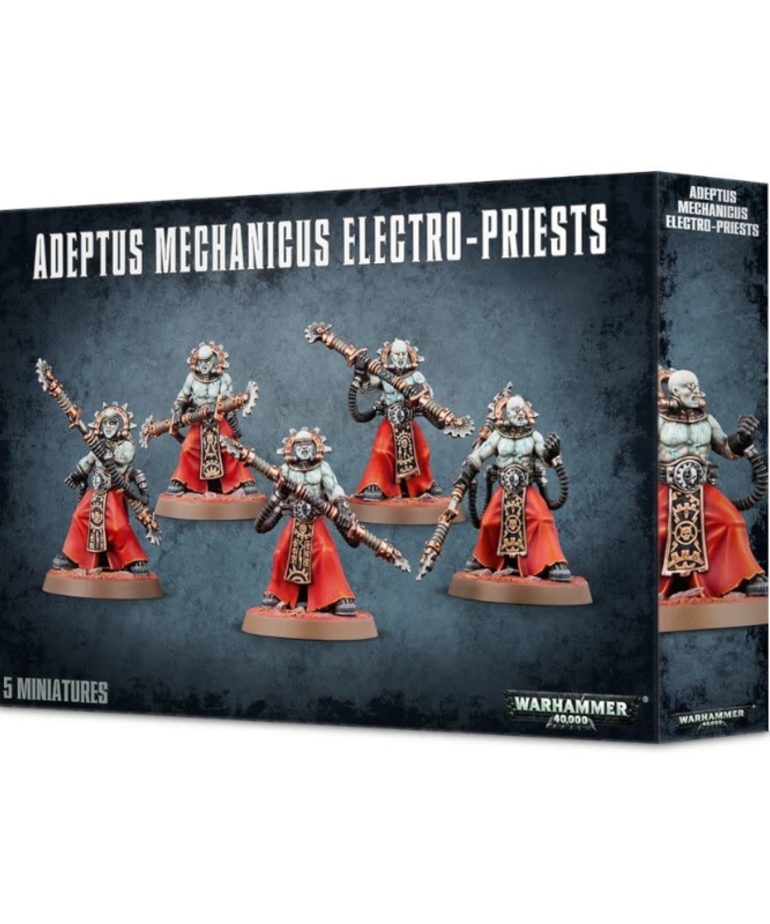 0 reviews
Add your review
- Surrounded by a protective veil of lightning, clutching electroleech staves, the Fulgurite Electro-Priests believe that there is no greater blasphemy than the waste of energy.
- Literally filled with the Motive Force, the Corpuscarii spread the blessin
7 In Stock
Add to wishlist / Add to compare / Print

Surrounded by a protective veil of lightning, clutching electroleech staves, the Fulgurite Electro-Priests believe that there is no greater blasphemy than the waste of energy. Striding into battle at the height of religious mania, they are capable of draining the very bioelectricity from their foes, storing it in powerful capacitors as the enemy drops to the ground, cold and inert as stone. This stolen energy will later be used to power their holy march across the galaxy, everything behind them falling into permanent darkness.

The Fulgurite Electro-Priests come armed with electroleech staves - five of these are included, complete with their power pack assemblies. Ten different head crests and five different heads are in the box, each featuring the gruesome, eyeless faces of the Electro-Priest’s ecstatic trance.

Literally filled with the Motive Force, the Corpuscarii spread the blessing of illumination in the name of the Machine God. Blazing with lightning, electrosurgically prepared for the unimaginable power coursing through what was once their veins, a Corpuscarii Electro-Priest discharges incredible, sparking bursts of thrumming energy, shaking apart enemies in an ecstatic religious fervour.

The Corpuscarii Electro-Priest comes armed with a pair of electrostatic gauntlets, with five pairs and their respective power pack assemblies included in the box. Included are five different torsos, five heads and ten head crests (five of which are Corpuscarii, five Fulgurite).