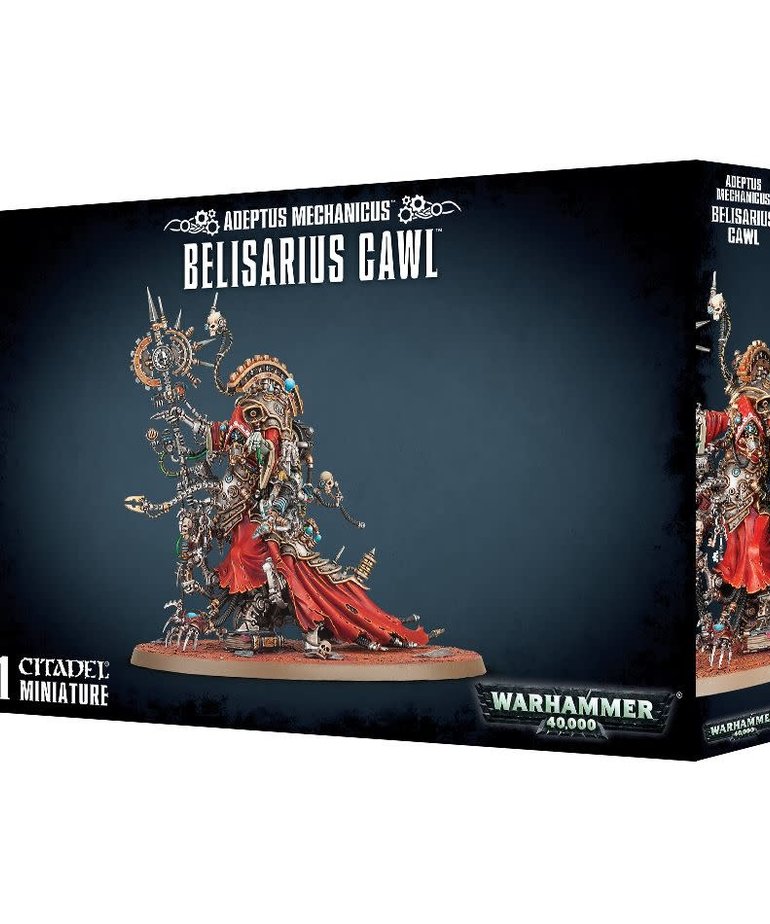 0 reviews
Add your review
This multi-part plastic kit contains the components necessary to assemble Belisarius Cawl, Prime Conduit of the Omnissiah.
4 In Stock
Add to wishlist / Add to compare / Print

Archmagos Dominus Belisarius Cawl was already old at the dawn of the Imperium, over ten thousand years ago. During that span of ages the Tech-Priest has served as a Forge Lord, a Lexico Arcanus and a renowned Magos Biologis. On the battlefield Cawl is a force to be reckoned with, fearlessly scuttling into the thick of the fighting, assessing threats and broadcasting carefully planned orders to his troops. Most enemy fire is thwarted by his force field; however even when parts of his mechanised body are blown off, cables snake out in a whir of activity to effect immediate repairs, or swarm anything that dares comes close…

This multi-part plastic kit contains the components necessary to assemble Belisarius Cawl, Prime Conduit of the Omnissiah. Towering over his Adeptus Mechanicus brethren, he stands much taller than even other favoured Tech-Priests of the Omnissiah, with countless augmentations distorting his barely-human frame. He carries an Omnissian axe, which acts as a convenient mounting point for an array of sensors and his voice broadcasting unit, and an arc scourge – this arcane energy weapon is covered in cables, sensors and extra appendages. This theme of augmentation is continued throughout – Cawl’s robes are not-quite covering a massive amount of robotic extensions, with several extra legs, prehensile arms and cables dragging along behind him. A scryerskull hovers above, and there are several symbols of the Machine God dotted about the miniature.

Contents:
- Belisarius Cawl comes as 42 components, and is supplied with a Citadel 105mm x 70mm Oval base.