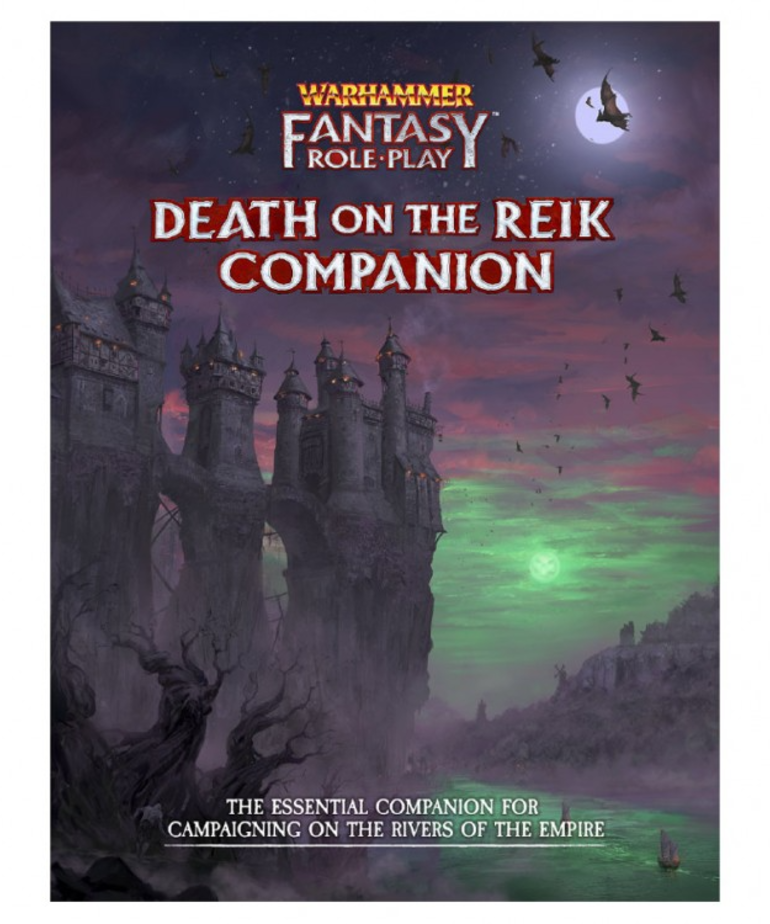 0 reviews
Add your review
- The Death on the Reik Companion is the second of our 5-part series of companion volumes to the Enemy Within campaign.
1 In Stock
Add to wishlist / Add to compare / Print

The Death on the Reik Companion is the second of our 5-part series of companion volumes to the Enemy Within campaign. It is packed with supplementary material to not only expand Death on the Reik but also support any WFRP games set on the rivers of the Empire.

Enemy in Shadows Companion Includes:
Guest Commentaries: James Wallis, writer and developer ofWFRP 1st Edition, and Martin McKenna, the artist for the original Death on the Reik, reflect on their memories of the Enemy Within campaign.
Deleted Scenes: The Imperial Plenipotentiary and The Maria Borgia add two updated and expanded scenes to include in any river-based adventure.
Extracts from Hortensia Puddlefoot's General Concordance of Herbs: A selection of new herbs to add to your games of WFRP.
Life on the Reik: A deep examination of river life in the Empire, including expanded trading rules, new river vessels, boat upgrades, canal locks and tolls, river travel rules, the Imperial River Patrol, river crime, and much more.
The River Bestiary: A host of new river-based creatures to terrorise those foolish enough to go swimming.
Waterborne Diseases: A collection of waterborne diseases to make any adventurer pause before wading too deep.
The Imperial Semaphore Service: The Empire's extraordinary engineering project to send messages across the Empire is detailed in full, explaining the wide-ranging plans for this newest communication service.
River Trading Posts of the Reikland: A guide to the river trading hubs of the Reikland, from the largest merchant towns to the smallest villages.
Riverfolk of the Reik: A wide range of river-based NPCs to add to any WFRP adventure, with hints and tips for how to use them.
The Red Crown: A GM's Guide: A complete breakdown of the Red Crown, one of the most dangerous Tzeentch cults of the Empire.
The Emperor Luipold: An update of the WFRP 1st edition supplement The Emperor Luitpold, detailing one of the Reik's most luxurious river liners.
The Vengeance of the Gravelord: Part 1 of a sequence of adventures that run parallel to the Enemy Within, including an adaption of the WFRP 1st edition classic, Carrion up the Reik.