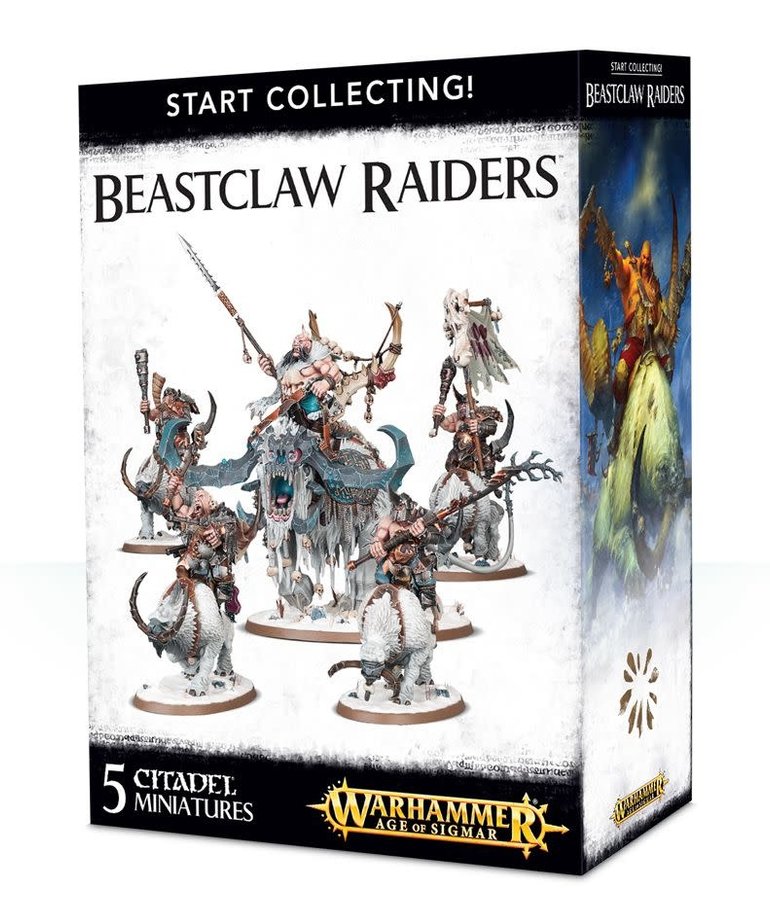 Harbingers of dark months and dead seasons, marauders who stalk through the frozen darkness, the ogor tribes of the Beastclaw Raiders are gargantuan creatures of strength and hunger. Unlike orruks or warriors of the Bloodbound they fight not for the thrill but for survival â€“ battlefields are their hunting grounds, and when the foe lies cold and dead their bodies are harvested with a gluttonous fury, for it takes a truly staggering amount of meat to satisfy these massive, ravenous raiders. Constantly on the move, their nomadic way leaves behind naught but a wasteland of cracked ice and frozen bones â€“ and their appetites drive them to every corner of every mortal realm.

This is a great-value box set that gives you an immediate collection of fantastic Beastclaw Raiders miniatures, which you can assemble and use right away in games of Warhammer Age of Sigmar! Youâ€™ll receive:
_x000D_ _x000D_ - a Stonehorn â€“ this can be assembled with a mounted Frostlord, Huskard or Beastriders, with chaintrap, frostspear and harpoon launchers as weapon options, or can be optionally assembled as a Thundertusk;
_x000D_ - a Mournfang Pack, made up of 4 ogors riding fearsome Mournfangs wielding a selection of ironlock pistols, culling clubs and prey hackers.

Included in the box is an exclusive Warscroll Battalion rules sheet â€“ Loshar's Frost Guard â€“ allowing you to collect, assemble and play with your new miniatures right away!