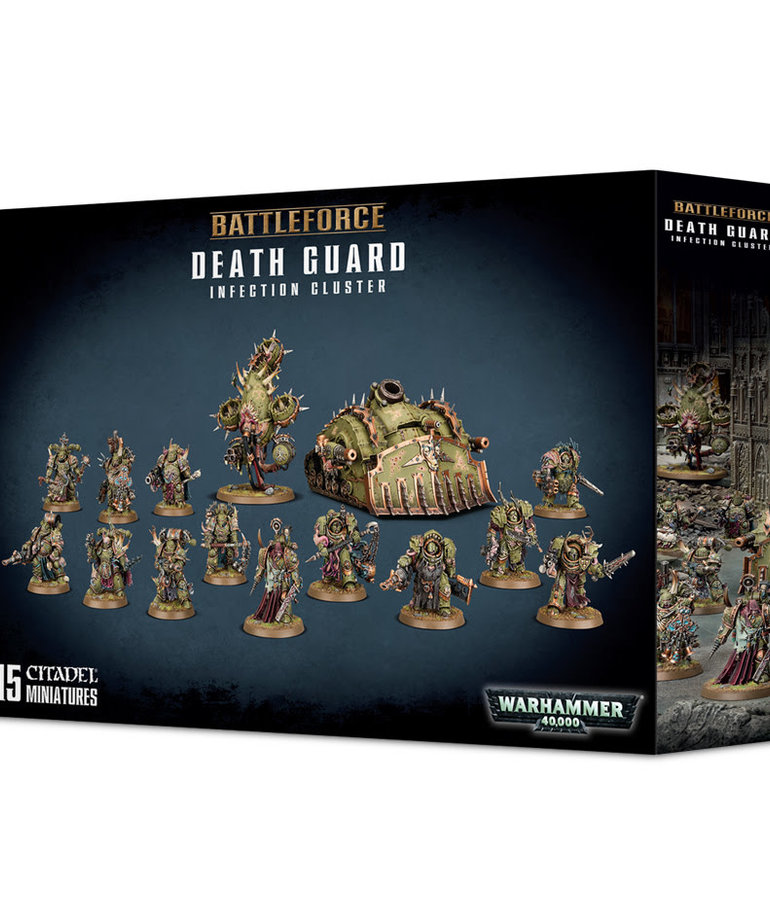 The warriors of a Death Guard Infection Cluster are insensible to pain, shrugging off grievous injuries as though they were mere flesh wounds, and they wade implacably through incoming fire, leveling hails of bolts and lobbing devastating bombardments at their enemies for the glory of their feculent god, Nurgle.

Kick-start or bolster your Death Guard collection with an Infection Cluster. This set offers a solid core of units and vehicles that serve equally well as reinforcements to an existing army or the start of a new collection, and saves you a lot of money to buying them individually!

Hereâ€™s whatâ€™s in the set:
- 1 Plague Surgeon, armed with a balesword and a (horribly) tainted narthecium.
- 7 Plague Marines, equipped with a plague knife and boltgun. All of the many weapon options available to the Plague Marines are included in the kit.
- 5 Blightlord Terminators, armed with combi-bolters and either a balesword or bubotic axe. As with the Plague Marines, all of the weapon choices that the Blightlord Terminators have access to are included.
- 1 Foetid Bloat-drone, which can be armed with a pair of plaguespitters, a heavy blight launcher or a fleshmower.
- 1 Plagueburst Crawler, a formidable siege vehicle equipped with a plagueburst mortar, either a heavy slugger or rothail volley gun, and a choice of two plaguespitters or a pair of entropy cannons.