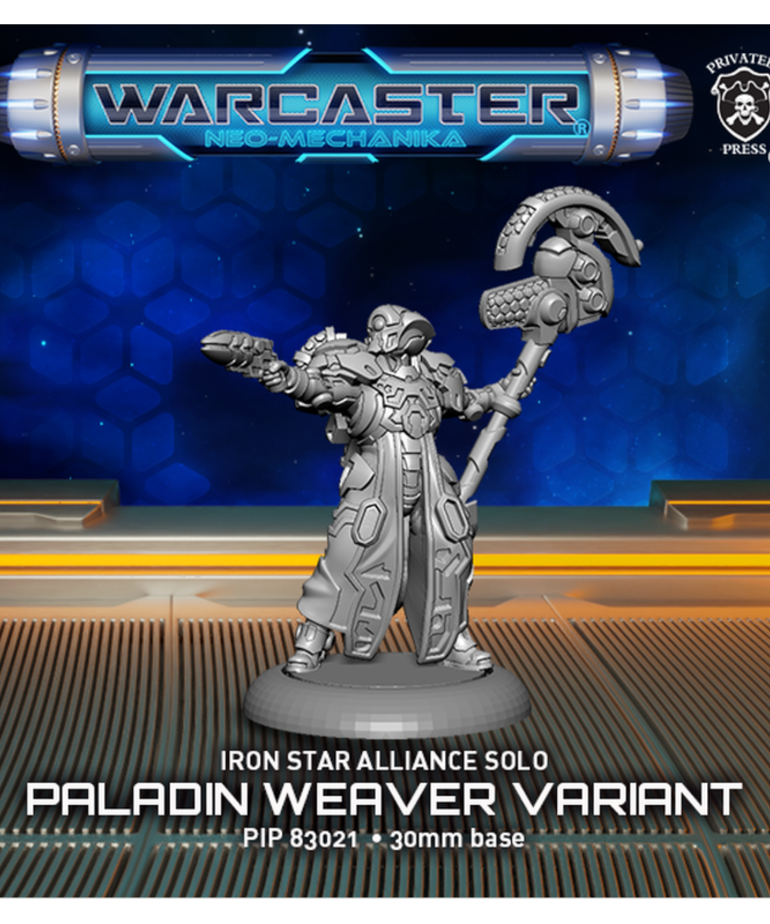 Accompanying the Alliance’s forces on the battlefield, the Paladin Weaver acts as a living focus for the Warcaster’s offensive arcane might. The destructive Fury Cyphers channeled through the Weaver unleash all manner of psychokinetic ruin upon those who would face the Paladins in battle. While charged with Arc, the range of these terrifying battle Cyphers only increases. Further aiding the Warcaster on the battlefield, the Paladin Weaver can spike, or spend Arc, to activate the mechanikal power of its realignment codex, enabling the Weaver to rearrange Arc allocations amongst Alliance forces on the battlefield. Encased in formidable Paladin composite armor, the Weaver is even prepared to enter combat personally, bringing to bear the might of the null hammer, a battle staff capable of knocking Arc off any opponent it strikes.

The Paladin Weaver can channel destructive Fury Cyphers. It can spike, or spend Arc, to rearrange and add to Arc allocations to friendly units within 10˝. While charged with Arc, Furies channeled through the Paladin Weaver gain +5˝ range. The Paladin Weaver's Null Hammer melee weapon is capable of knocking Arc off of models it strikes. This Weaver wears Paladin Compound Armor, which gives it bonus ARM (Armor) against explosion damage.

This Variant sculpt can be fielded in your army to give more unique poses to your Paladin Weavers.