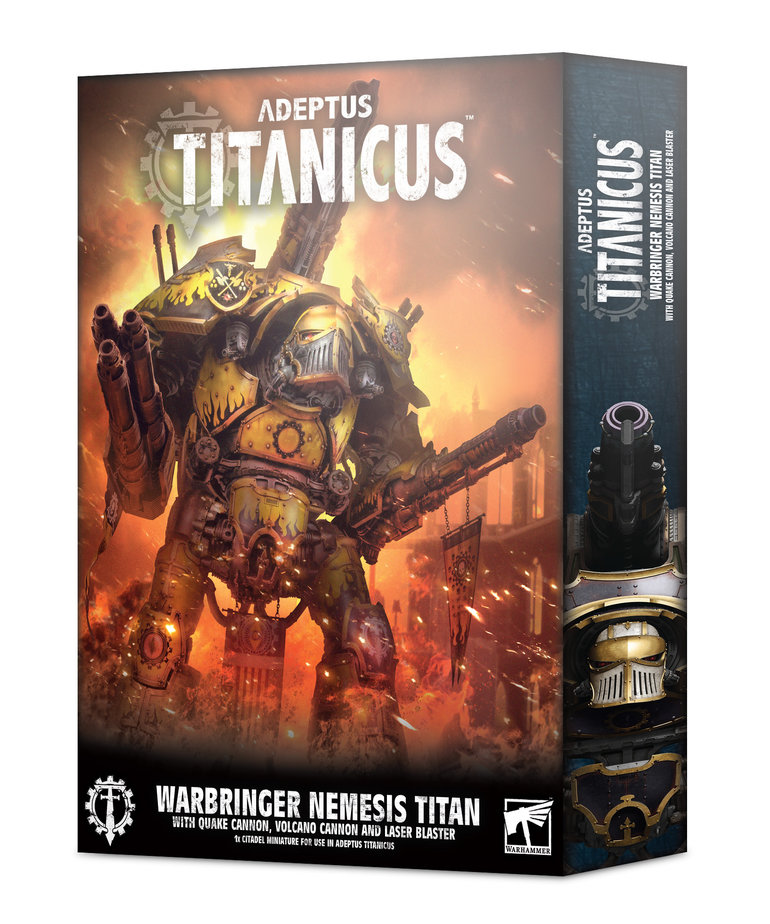 0 reviews
Add your review
- A mighty Battle Titan for use in games of Adeptus Titanicus
- Armed with a quake cannon, laser blaster and volcano cannon
- Add heavy firepower to your Titan Legions with this versatile and deadly war engine
Add to wishlist / Add to compare / Print

The Warbringer Nemesis Titan serves the Collegia Titanica in the role of heavy fire support. It mounts a single Warlord-scale weapon on its upper carapace and Reaver-scale weapons on its arms â€“ sacrificing the speed, armour and manoeuvrability of a conventional Battle Titan in favour of firepower far in excess of its size. Though rare and specialised, the Warbringer Nemesis is a sight to inspire dread in all but the most battle-hardened enemy princeps.

Standing between the Reaver and Warlord in size, the Warbringer Nemesis Titan is the perfect choice for the Princeps who wants heavy firepower and flexibility. The carapace-mounted quake cannon can damage enemy Titans and slow them down, allowing your other god-machines to close for the kill, while the Warbringer's arm-mounted weapons can pick off any Knights that get too close, or it can add to the devastation caused by its primary weapon.

Contents:
- This plastic kit comes in 144 components, and is supplied with a 105x70mm oval base. It includes a quake cannon, volcano cannon and laser blaster. The kit includes variant parts and can be built to allow the quake cannon to move.
- In addition, this boxed set contains three weapon cards and a command terminal to allow you to use your Warbringer Nemesis Titan in your games of Adeptus Titanicus. It also includes a transfer sheet with 142 decals, including generic ones and those specific to multiple different Titan Legions.