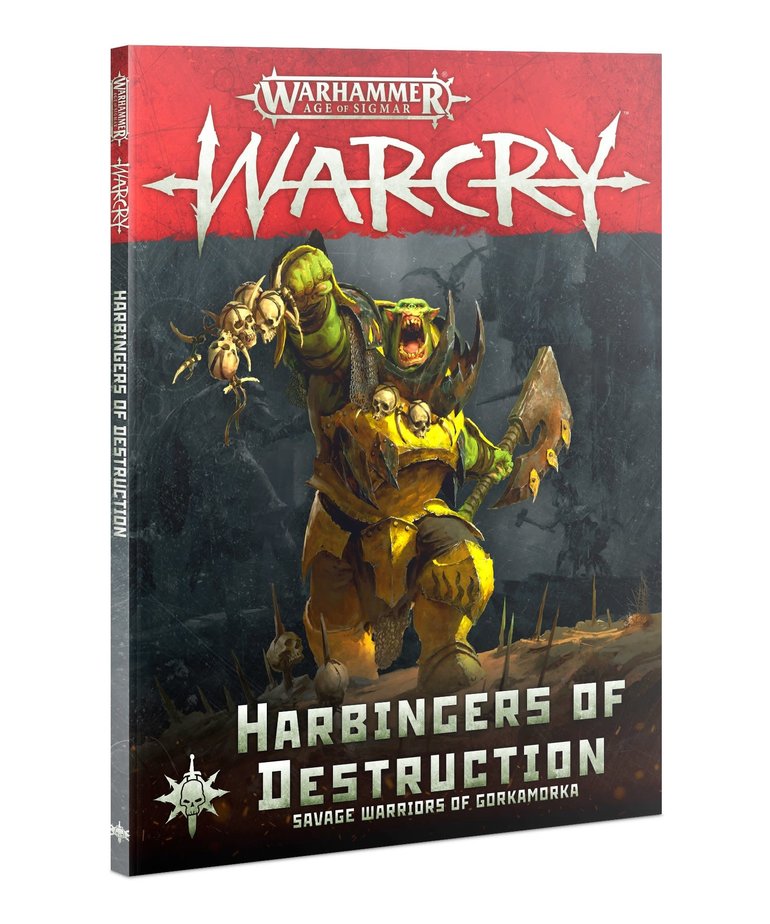 0 reviews
Add your review
- An essential guide for bringing the forces of Destruction to Warcry
- Full rules and profiles for nearly every model in Grand Alliance: Destruction
- New challenges and fresh ways to play, including updates for Allies and Monsters
Add to wishlist / Add to compare / Print

Nowhere is safe from the ravages of the bestial warriors of Gorkamorka, not even the domain of the Everchosen. The din of battle that echoes throughout the Bloodwind Spoil draws orruks, ogors, and grots like moths to a flame. Here, the strong survive, and the weak are but prey. Savage warbands fight anyone they can find to prove themselves the meanest and toughest of all – and because it fills their brutal hearts with joy.

Harbingers of Destruction is the essential guide to commanding the forces of Grand Alliance: Destruction in games of Warcry. Four large warbands are detailed in full, from the diminutive Gloomspite Gitz to the hulking Ogor Mawtribes. You’ll find loads of new fighter cards, background tables, Fated Quests, and Challenge Battles – in short, everything you need to play the forces of Destruction in full campaigns.

Contents:
- Full rules for the following warbands: Bonesplitterz, Ironjawz, Gloomspite Gitz, and Ogor Mawtribes.
- Fighter cards for nearly every model available to the Grand Alliance: Destruction ranges.
- Rules for three Monsters of Destruction: The Aleguzzler Gargant, the Skitterstrand Arachnarok, and the Dankhold Troggoth.
- Refined rules to include Monsters in your warband, as well as new abilities to use against them!
- New rules for warbands with mixed Faction Runemarks under the same Grand Alliance and more than one Leader.
- Tables for warrior names, warband origins, and leader backgrounds.
- 4 Destruction Fated Quests, including Spoils of Victory tables for both Honour and Glory.
- 6 Destruction Challenge Battles, including special rules and valuable Spoils.