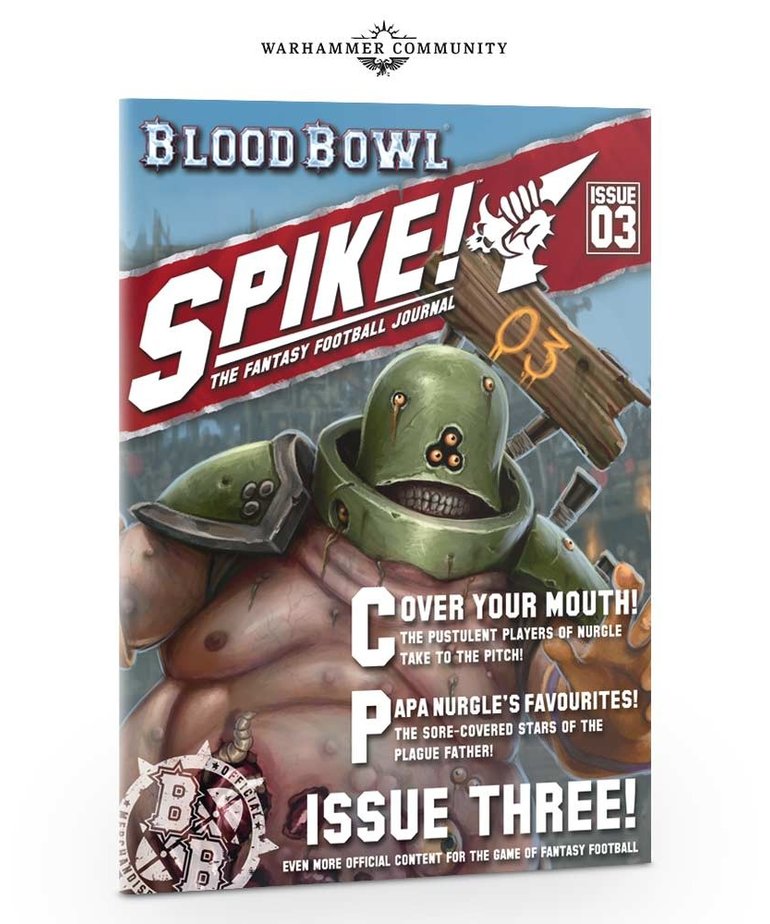 Guest edited by Glug Glottington, this is the third issue of Spike! Journal. Covering Nurgle teams, with a veritable host of brand-new content for Blood Bowl, this is sure to be a must-have for Chaos coaches... Contained in the 36-page journal:
_x000D_ _x000D_ - Papa Nurgleâ€™s Favoured Players: details and background on those teams dedicated to Nurgle, the most bizarrely cheerful of the Chaos gods. Youâ€™ll learn how they play, how they look and how they gleefully spread their rot and filth all over the pitch, with a focus on The Diseased Destroyers, Bile-City Blightkings, The Subterranean Slimeballs, and The Plaguebearers;
_x000D_ _x000D_ - Chat With the Rat: ace Skaven reporter Hackspit â€˜the Scribblerâ€™ Quillchewer talks with Bilerot Vomitflesh about being a follower of Nurgle, and asks: just where is the Garden of Nurgle?;
_x000D_ _x000D_ - Star Player Spotlight: â€“ a detailed profile of Bilerot Vomitflesh, who can play for Nurgle and Chaos Chosen teams. Includes his in-game cost, stats and skills, and career â€˜highlightsâ€™;
_x000D_ _x000D_ - Dirt From the Dugout: Spike! Journal interviews gossip columnist Mindy Piewhistle about the rivalry between the Dark Gods, and learns maybe a little more than theyâ€™d like about some insidious locker room shenanigans;
_x000D_ _x000D_ - Nurgle Playbook: an Introduction to coaching Nurgle teams, including an overview of the strengths of their team, advice on tactics, set-ups, and examples of the skills you can give to different positions.
_x000D_ _x000D_ - Star Player Spotlight: a grisly profile of Bulla Shardhorn, a pox-ridden beast who can play for Chaos Renegade, and Nurgle teams. Includes his in-game cost, stats and skills, and career highlights;
_x000D_ _x000D_ - Star Player Spotlight: a profile of Tolly Glocklinger, a former circus strongman (which is excellent) who can play for Nurgle teams. Includes his in-game cost, stats and skills, and career highlights;
_x000D_ _x000D_ - The Glittering Prizes: an overview of the recent history of Blood Bowl taking a closer look at many of the minor leagues and tournaments that have sprung up after the collapse of the NAF, becoming regular fixtures;
_x000D_ _x000D_ - Sideline Assistance: a trio of rotten new inducements for Nurgle, Chaos Chosen, and Chaos Renegade Blood Bowl teams. Plague Doctors, Cavorting Nurglings and Horticulturalists of Nurgle are available â€“ none of them do anything especially pleasantâ€¦;
_x000D_ _x000D_ - Mighty Blow!: tales of sporting glory from the career of all-time Star Player Bob Bifford, presented as an all-new comic strip drawn by the legendary Blood Bowl illustrator Pete Knifton, and written by official Spike! Journal sports-scribe Nick Kyme.